A Twitter person Mulligan Jesus follows — some of you humans actually manage to be clever from time to time — experienced a ‘miracle’ yesterday, he reports.  While cutting open a potato for dinner, he found THIS — 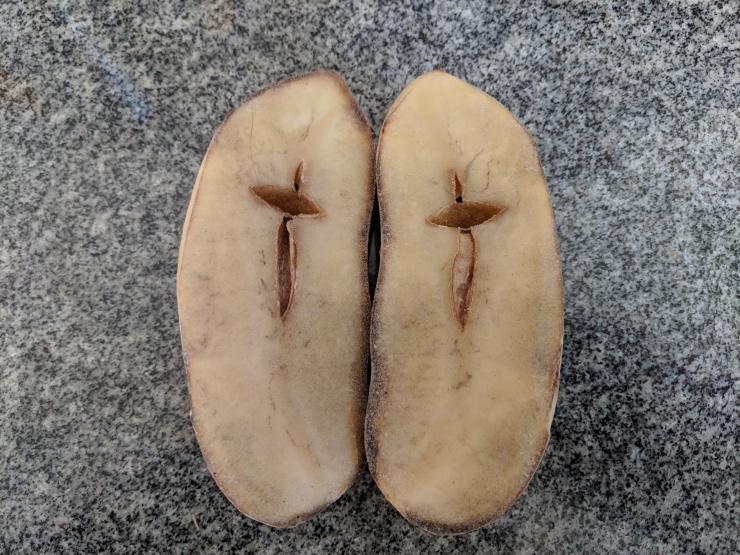 This Twitter person (rightly) described this experience as being ‘a miracle’ — and Mulligan Jesus is here to tell you that that Pilgrim is RIGHT!  It IS a miracle — in the sense that winning the lottery is ‘a miracle’.  The odds of winning are infinitesimally minute — yet someone wins.  Getting the potato with the cross in it — or the piece of toast with ‘Pretend Jesus’ face on it —

— that’s exactly like winning the lottery ticket cos that’s how the gods roll around here.  It’s how we spread out the ‘goodies’ as we think of em.  Yeah, not many goodies to go around but — as we say around here (chuckling as we do): “That’s Life!”

These days, that lottery ticket should be good for a few days of media frenzy.  Cash in as best ya can — that’s the deal, right?  As we say around here, ‘The Lord Loves Those Who Merch Themselves’!  Yeah, we actually say that (we take turns ‘being’ ‘the Lord’).  But the really, really clever humans — the ones we deities keep our eyes on — they don’t quit at making lemonade when we throw lemons at them, they make lemon daiquiri’s and lemon cake and lemon everything.

I hope this Twitter guy isn’t really hoping for that spud to rise from the dead.  About 24 hours from now, it’s going start stinking up his house.  There’s an irony in there that even an evangelical could probably suss out.  The lottery ticket here is the gullibility of the faithful.  Clearly a person who’s been ‘given’ such a thing as a naturally occurring anomaly inside a tuber is meant for greatness — it stands to reason!

And even a mildly talented human with mildly appealing camera presence could start a church and make a killing.

And, after all, isn’t THAT the name of that tune, Pilgrim?